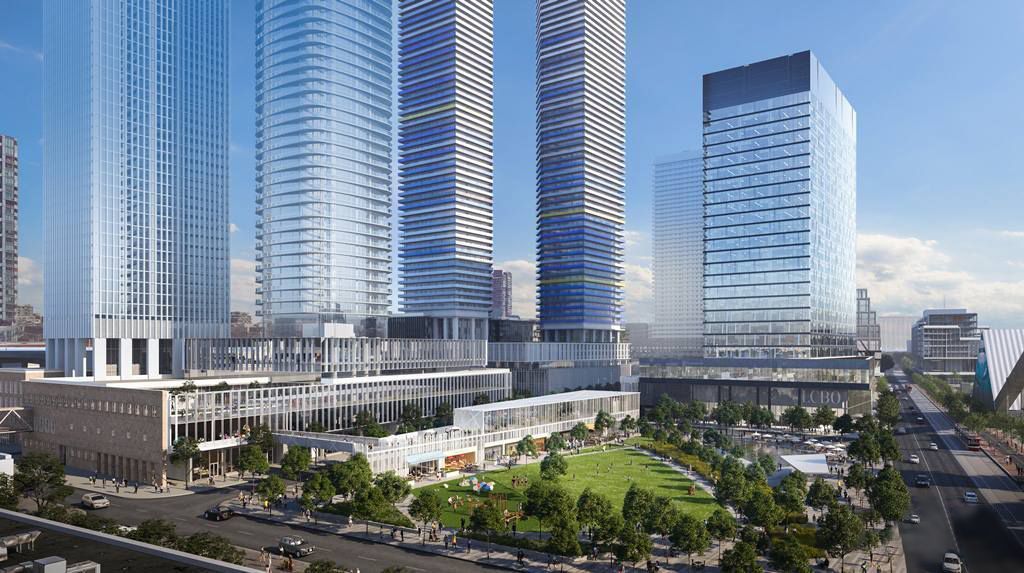 TORONTO, Jan. 11, 2018 – Triovest, alongside its project partner Menkes and longstanding client Greystone Managed Investments, recently kicked off the first phase of Sugar Wharf with an official ground breaking ceremony.  Special guests Toronto Mayor John Tory and Ontario MPP and Finance Minister Charles Souza spoke at the event and reinforced the significance of the project as the largest mixed-use development on the Toronto waterfront.

Located on an 11.5-acre parcel of land, this large-scale development will be situated between Lakeshore Boulevard and Queens Quay East, and between Freeland Street and Lower Jarvis Street. A landmark office tower on the Toronto waterfront at 100 Queens Quay East will be the first phase of a vibrant new mixed-use community called Sugar Wharf.  When complete, this new community will include employment, retail and residential uses, a new public elementary school and daycare, and a new two-acre public park.

The office tower, which will serve as the new headquarters of the Liquor Control Board of Ontario (LCBO), will be a 25-storey, 690,000 square foot, Class AAA building.  The ground floor of the building will feature a 25,000 square foot flagship LCBO retail store, which will replace the current Queens Quay store.

Sugar Wharf will have between 4,000 and 4,500 people working in the community, plus a resident population ranging between 7,000 and 8,000 people upon completion.  The office tower will be followed by five residential towers on two podiums and deliver 4,500 new homes for Toronto families.  The towers will range in height from 65 to 90 storeys.

Three Wins for Triovest at the 2019 BOMEX Awards

Trio of Wins at the 2019 HOOPP LEAP Awards

6880 Financial Drive Reaches for the Star!

Triovest Achieves its Strongest Performance at the HOOPP LEAP Awards

Triovest Wins the Industrial Lease of the Year at REX Awards

Triovest Applies its New Mission at Centre on Barton

Triovest Represents Greystone Managed Investments Inc. in the Acquisition of a $260 Million Development on Toronto’s Waterfront Anchored by the LCBO

WELCOME TO THE NEW TRIOVEST.COM

Triovest Receives a BOMA Certificate of Excellence for Foresters Centre

Certificate of Excellence for ATB Place in Edmonton

Construction to Begin on Industrial Development in Halton Hills

Property Management Team of the Year Award for Edmonton