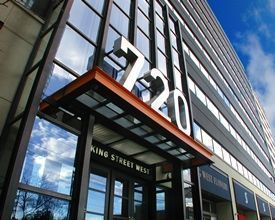 Triovest is pleased to announce that 720 King Street West in Toronto has achieved certification of LEED EB:OM Gold.

Constructed in circa 1973, 720 King Street West was redeveloped by renowned designers Munge/Leung and completed in phases between 1998 and 2004. This renovation of the building changed its original use of light industrial to commercial class “A” office occupancy. The building has since undergone many interior renovations accommodating tenant requirements.

Leadership in Energy and Environmental Design (LEED) is a rating system developed by the US Green Building Council (USGBC) to evaluate the environmental performance of a building and encourage market transformation towards sustainable design and construction. LEED is the most recognized green building rating system in North America and is rapidly becoming an international standard around the world.

This achievement was realized through the combined efforts of the Green Council, represented by the building’s tenants, and the staff at Triovest and Green Reason Inc.